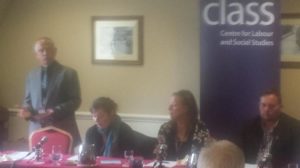 R75 BRANCH SECRETARY attends CLASS fringe meeting as one of the panel of speakers
Where to Now for Trade Unions after the 2015 Election?
The Centre for Labour and Social Studies (Class) is a new think tank established in 2012 to act as a centre for left debate and discussion. Originating in the labour movement, Class works with a broad coalition of supporters, academics and experts to develop and advance alternative policies for today.